Deadlifts are a staple exercise in strength training due to their many benefits and impressive results. However, these can be taken a step further with eccentric deadlifts, leading to better athletic performance.

Eccentric deadlifts focus on the lowering phase of the movement, where the muscle contracts eccentrically, and these can be accentuated or slow tempo.

If you're looking to take your workouts to the next level with eccentric deadlifts, look no further than this article where we break things down, rep by rep!

What Is An Eccentric Deadlift?

We have established that eccentric movements are where the muscle is lengthened as it contracts. In a deadlift, this is when the weight is lowered. Focusing on this movement can have many benefits, such as building power and incrementing your weight lifting routine.

Accentuated eccentric emphasises the deadlift movement to increase the range of movement and the load on the hamstrings, back, and glutes. The load during the descent is heavier than the load lifted, adding further stress on the body during the phase of the lift that will give the most benefit. This helps build strength and power as accentuated eccentrics have led to superior results in terms of hypertrophy, power, and strength over any other eccentric training method studied.

Slow tempo eccentrics make the exercise more challenging, improving the efficiency of the training stimulus. Most notably, slow tempo eccentric does not overload the eccentric phase as loads are below concentric 1RM. Over time, the intensity of the lowering phase can be increased with most exercises, increasing the eccentric stress on the muscles and encouraging further strength and size gains. 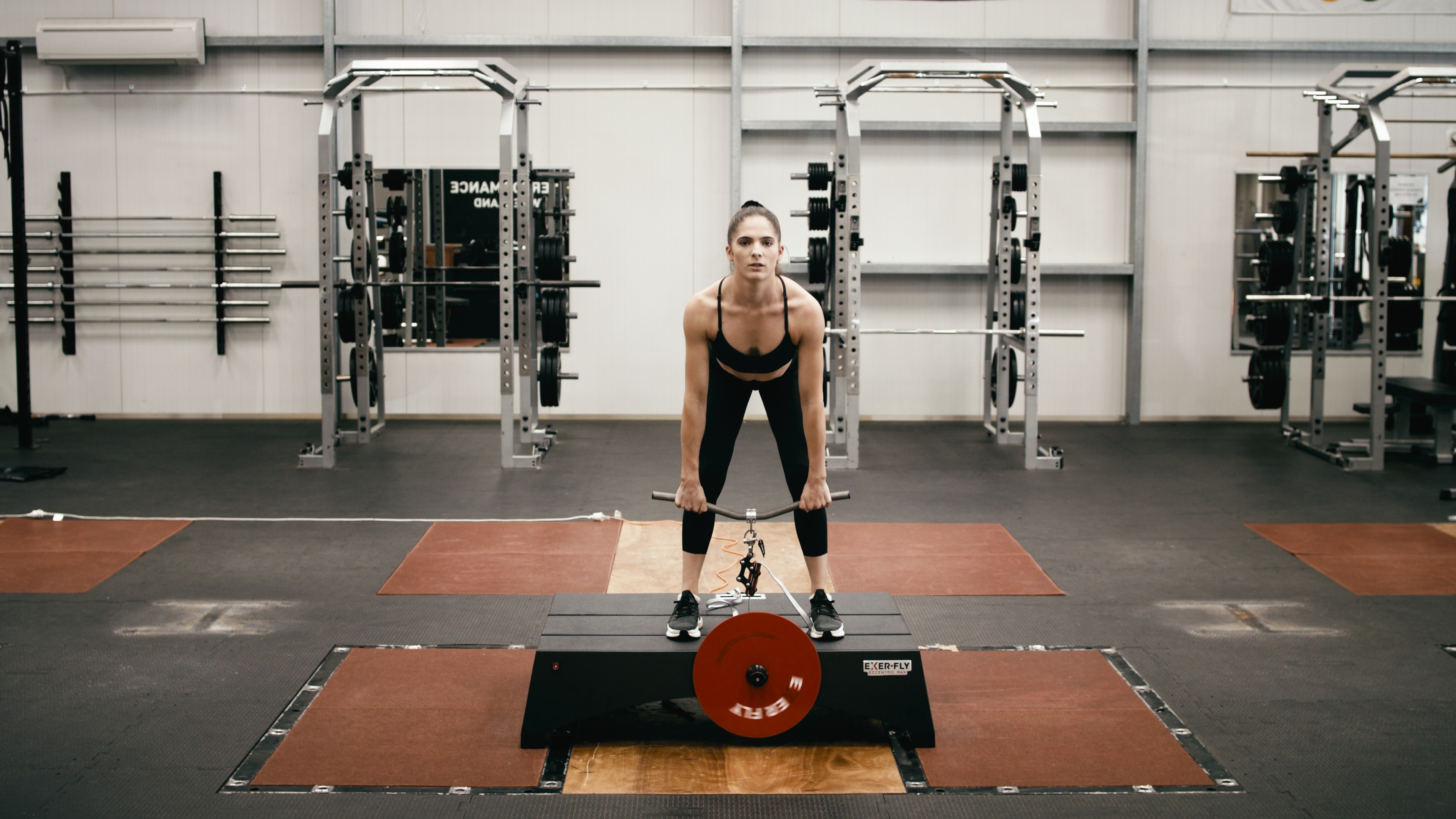 You can strengthen your back and knee by focusing on the eccentric phase of a deadlift. This is when the muscles work their most challenging, leading to quicker gains. Studies have shown that when eccentric exercises are performed at intensities greater than concentric training, significant increases in eccentric strength and muscle mass are seen.

Because your body will be working harder, eccentric deadlifts also improve calorie burning that sticks even after your workout. Research has found that the boost to your resting metabolic rate created by eccentric exercises can last up to 72 hours, ideal for those looking to burn fat and build muscle.

Eccentric deadlifts help build stronger tendons and ligaments, which are vital exercises and aren't targeted as much as traditional resistance training. Our tendon stiffness and power output decrease as we get older, costing us more energy to move. Hence, it is vital to keep our tendons and ligaments strong. These are strongly associated with mortality and morbidity in the elderly and may be the key to upkeeping health and longevity.

Focusing on the eccentric phase of a deadlift helps build flexibility throughout the body, increasing the muscle length that shifts the angle of peak torque to longer muscle lengths. When placed in these situations, you can handle these forces without injury. This is because of the eccentric specific adaptations of the sarcomeres (pieces of muscle fiber) that are added to increase the length of muscle fibers shifting the angle of peak torque, as mentioned before.

Slow eccentric deadlifts push you beyond your limits. You are challenging your muscles and preparing your body for more challenging stressors, which can be translated into any sports discipline. This is because eccentric training incites more force production, which has been directly linked to actions during jumping, weightlifting, cycling, sprinting, and golf swings – thus linking RFD with a better athletic performance. 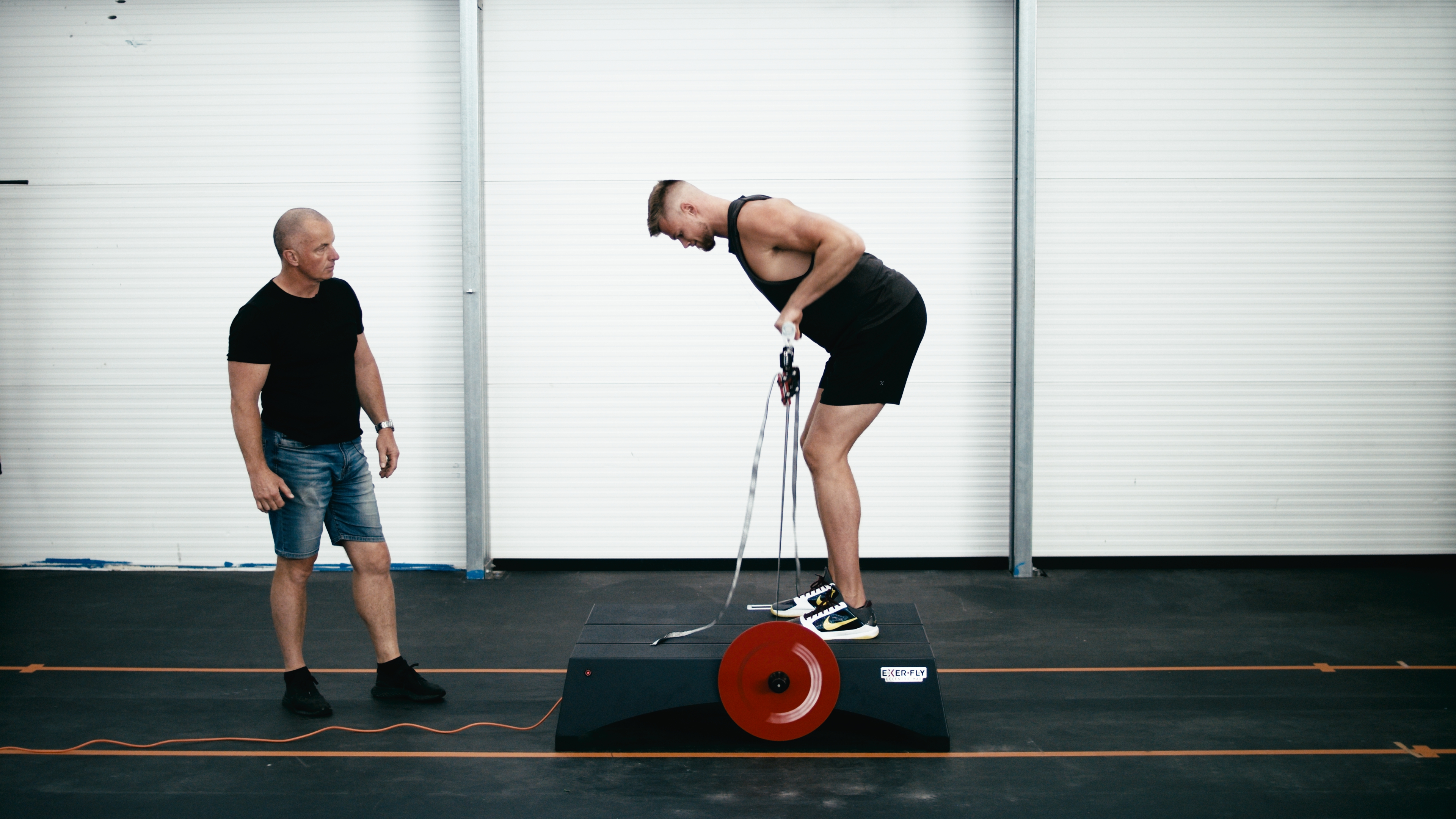 How To Perform The Tempo Eccentric Deadlift

With tempo training, you’ll have a sequence of four numbers pop up in a program. Tempo numbers are always written in this order: Eccentric pause (bottom), concentric, pause (top). However, the deadlift, pull-ups, and other similar movements start with the concentric phase. So when reading the tempo for these types of movements, make sure you understand what position the movement begins to complete the exercise with the correct tempo.

If the deadlift tempo is 3-1-0-1, you’ll start at the third number (concentric) instead of the first number (eccentric).

How To Perform An Eccentric Deadlift

Having to unload plates for each set is a huge pain, which is why the next option is the best for eccentric deadlifting.

How To Perform A Flywheel Eccentric Deadlift

The best way to eccentric deadlift is using Exerfly's eccentric motor on the Exerfly platform. The flywheel training device only gives back eccentrically what you produce concentrically, so the eccentric motor applies more force on the downward phase.

For example, if you set the eccentric motor to a 10% overload, you will receive 10% more force than you produced concentrically to resist during the eccentric. Here’s how you do it:

Studies have proven the effectiveness of eccentric training and the benefits of eccentric deadlifts. However, keeping safe throughout these exercises is paramount, especially when dealing with larger weights. Get comfortable with the movements before exercises with weights, especially as you start to focus on the eccentric phase. Eccentric training can lead to increased DOMS (delayed onset muscle soreness), which is normal and subsides quickly as you are consistent with it. Just keep your form correct and steady progress your loads- and enjoy progress like never before!

Next time you're working out, remember these tips, focus on your movements' eccentric portion, and watch the magic happen.